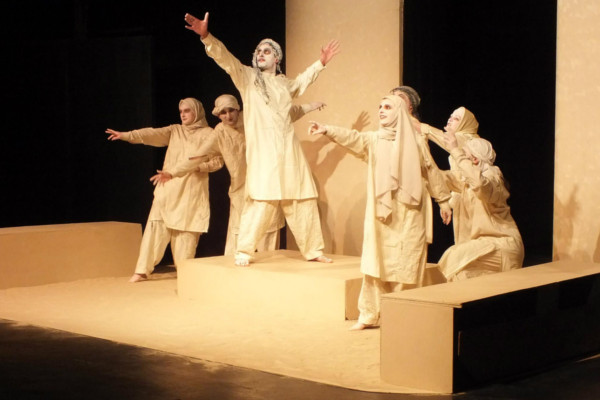 Both eternal and timely, ancient and modern, the 2500-year-old Antigone is about the very same political and ethical struggles we face in the world right now. Mark Coleman’s bold new production sets Sophocles’ tragedy in a radical Islamist state.

“Any concerns about the change of context were amply dispelled by the touching and delicate handling of not only Mark Coleman’s direction but also his apt and sparse Set Design which makes the words and universal warnings that have made Sophocles words so relevant for nearly three millennia centre stage as they should be.” – Tariq Kataria

“Antigone doesn’t disappoint. There are many long, passionate speeches in this play, nicely contrasted by the constant movement and rhythmic group storytelling of the chorus. A bumbling Sentry and bejeweled prophet also bring some comic lightness to the overall tragedy. All the cast wear the long, loose clothes and headscarves of the Middle East. This, along with the plain set and sandy floor gives a stark desert backdrop to the story. The chorus, with their white-painted faces and sand-coloured clothes, become part of the landscape and the relentless waves of fate moving in on the King.Creon was convincingly complex. Initially calmly confident in his position, he increasingly beats back good counsel and warnings of disaster with agitated rage, causing events to spiral into inevitable tragedy for everyone. His eventual howling grief and humility come far too late.Running for two hours with no interval, this production holds the attention from start to finish. Human nature hasn’t changed over millennia, and the clashes between the characters stick in the mind long after the play has finished.” – Elizabeth Holland