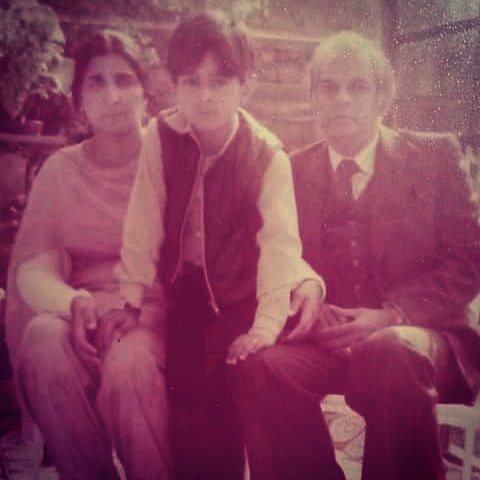 As the youngest and first to be born in the UK of Asian immigrants, I reflect on occasion what that means in light of what I’ve experienced growing up in Glasgow.

To answer that question, in this article I explore my family’s life before partition and eventual settlement in the UK.

My parents grew up in pre-partition India on opposite sides of what would eventually become a hastily drawn border on a map.

I know very little of my father’s upbringing, I never had that chat with him before he passed in 1999. My mother, however, has shared her stories of the fear, loss, and horror that ensued crossing into the newly formed Pakistan in 1947.

She was eleven at the time, a somewhere in the middle child with ten siblings, four of whom were boys. Ludhiana in Northern India, their home, was a peaceful multi-faith community where Hindus, Sikhs, and Muslims lived and worked together in harmony.

My mother shared playful tales of climbing trees with friends, picking fruit without permission, and getting into fights with rival kids. Not her fault of course, so she tells me. Her father would tell her off for coming home in tears in the face of defeat.

My maternal grandfather was a Numbardar, a respected position in the community. The few times I met him before he passed, I remember him to be a very tall man of selective words sitting in a corner smoking his hookah (a waterpipe for smoking tobacco).

Tall stature was also a memorable feature of my paternal grandfather, a school headmaster. His 6′ 7″ stocking feet combined with a reserved demeanour promoted an air of authority, his walking cane a reminder of the discipline that awaited those who fell out of line. Thankfully, I was never on the receiving end of that tough love, perhaps because I kept out of his away.

In his younger years he served in the British Indian Army, as did my mother’s paternal grandfather. Perhaps that explains my long-standing fascination with the military, and my brother’s eventual enrolment in the Royal Air Force (RAF).

Life in Ludhiana sounded ideal, a place where everyone lived, worked and played together regardless of creed.

It would not be until 1968 that Enoch Powell would deliver what became to be known as his ‘Rivers of Blood’ speech. Yet, my mother recounts such scenes in 1947, when her 11 year old self and family crossed the new border.

The line had been drawn. Indians were given only a few hours to pick a side. Lives changed overnight, from affluence to poverty, from poverty to destitution.

Those lucky enough to be on the right side of the border avoided the mass murders that greeted those less fortunate. My father’s family were spared the horrors of migration as they lived in Layallpur (now Faisalabad).

Packed trains would arrive in India from the newly formed Pakistan, but they were ghostly silent. My mother still remembers the train doors being opened to reveal corpses and pools of blood.

Similar scenes met those on the other end of the train line in Pakistan and those making the journey across the border on foot.

I ask my mother to reveal more, but she fights to subdue tears. She eventually talks about refugee camps and begging for food to feed her younger brothers.

Migrating families were alloted property that had been abandoned by those crossing the young border. It’s hard to imagine what it would be like to hastily leave one’s family home in the middle of the night, trek to a newly formed country while avoiding imminent death, and settle in a building which belonged to a family on a similar journey in the opposite direction.

As I write this I feel the need to ask more, but I know it will only upset my mother to talk about it. At 86 she’s happy watching her game shows all day and especially Judge Judy because apparently, “The people are real, the cases are real. The decision is final!”

2020 marks the 70th year since my parents’ marriage. Arranged, of course. Although my mother had noticed my father around the area, she never actually got to meet him until their first night together, at which point she promptly told him to get a haircut and a shave.

By the early sixties, my father moved to Scotland via Germany for better job opportunities to support his parents and young family, which by that time included a son and daughter.

Initially, he worked in the manufacturing industry, tried various business partnerships, and eventually settled on a career with Strathclyde Passenger Transport in Glasgow.

By the late sixties, my mother, brother and sister followed to build a new life in sunny Scotland.

Despite my father’s warnings, the weather was a complete shock, let alone the culture. To this day, I don’t understand why he chose Glasgow, a city which experiences four seasons in twenty minutes. Perhaps he just wanted to move away as far north as possible. On a positive note, I should thank global warming for the recent warm days.

There was never a shortage of support from the growing Asian community in Glasgow, an extension of how things used to be in India before partition hit the fan.

For the most part, Sikhs, Hindus, and Muslims had put aside past differences to work together in a new land, nurturing, sharing, and supporting one another in times of need.

Distrust was still present in the older generation, for whom past losses were still fresh in memory. But these were few and far between.

Settling in a new country, Asian immigrants found unity in the face of new challenges.

Growing Up In Glasgow

In 1976, the Sabirs welcomed a new addition to the family, 16 years after the second. A year later, my brother joined the RAF at the age of 19. He would send us postcards from around the world, and visit perhaps every 6 to 9 months.

My mother would worry every time he was stationed abroad during conflict, such as the Falklands War, both Gulf Wars, and Ireland. He forged a 30 year career in the RAF. I have a lot of respect for him.

My sister was married off by the age of 23 to build a new life and has been well looked after. Since then, it felt like being raised as an only child.

Bollywood movies with superstar Amitabh Bachchan were a regular staple of family bonding. My favourite film of that era was Sholay (1975), a remake of The Magnificant Seven (1960), which itself was a re-imagining of Akira Kurasawa’s Seven Samurai (1954).

Saturdays were ‘fish and chips’ night – the one evening when we would go for a ‘Scottish’.

There would be regular visits from ‘aunties’ and ‘uncles’ to exchange the latest community gossip.

Growing up in Glasgow wasn’t too bad, apart from the regular reminder of the colour of my skin.

Racism is hard to avoid when it’s right outside your front door, in your neighbourhood, in the playground, during class, and on your way home.

I’ve shared my experiences of racism in earlier blogs, Bleeding The Same Colour and Hordes & Hooligans, and don’t intend to delve further here.

Suffice to say, the prejudice is not only skin deep, but includes a more visceral hatred of other cultures and a misguided belief that one’s country is being slowly invaded by a hostile foreign force.

It makes one wonder how the colonies must have felt to witness their cultures being slowly infiltrated, assimilated, and dominated by the British Empire.

The current global climate, especially in light of the pandemic, has proven that situations can change overnight. In fact, that is the very lesson of partition.

My parents having lived here since the 1960’s have firmly believed that the United Kingdom is and always will be a host country. As guests we can be told to leave at any time, all it takes is for politics to swing in the Right direction.

It’s up to the British born generation of Asians to re-evaluate the present and forge a more unified future in the face of such possibilities.

Where are you really from?

It’s rare nowadays for me to be questioned about my heritage. The last time it happened was in the London Underground when I was travelling with my then partner who was white English.

An English couple seated opposite had been eyeballing us. One of them complimented my necklace and then proceeded to ask about my heritage. I immediately sensed where the conversation was going.

I was asked, “Where are you from?”, to which I responded with a thick Glaswegian accent, “Scotland”.

But, am I really Scottish?
Recently, I was told by a Glaswegian that if I was born in Scotland then I’m Scottish.

Do I feel Scottish?
Partially. I also don’t feel completely Indian. I certainly don’t identify as Pakistani, due to the fact that had I been living at the time, I would have chosen the Indian side of the partition. In hindsight, India should never have been broken apart, but of course certain political parties had their own agendas.

For many years, I distanced myself from what it means to be Indian, due to repeated racist conditioning. The pandemic has given a blessing of time to discover what my heritage is and what it means to me.

If asked, I describe myself as ‘Scot-ish’.

Ultimately, I am who I am.