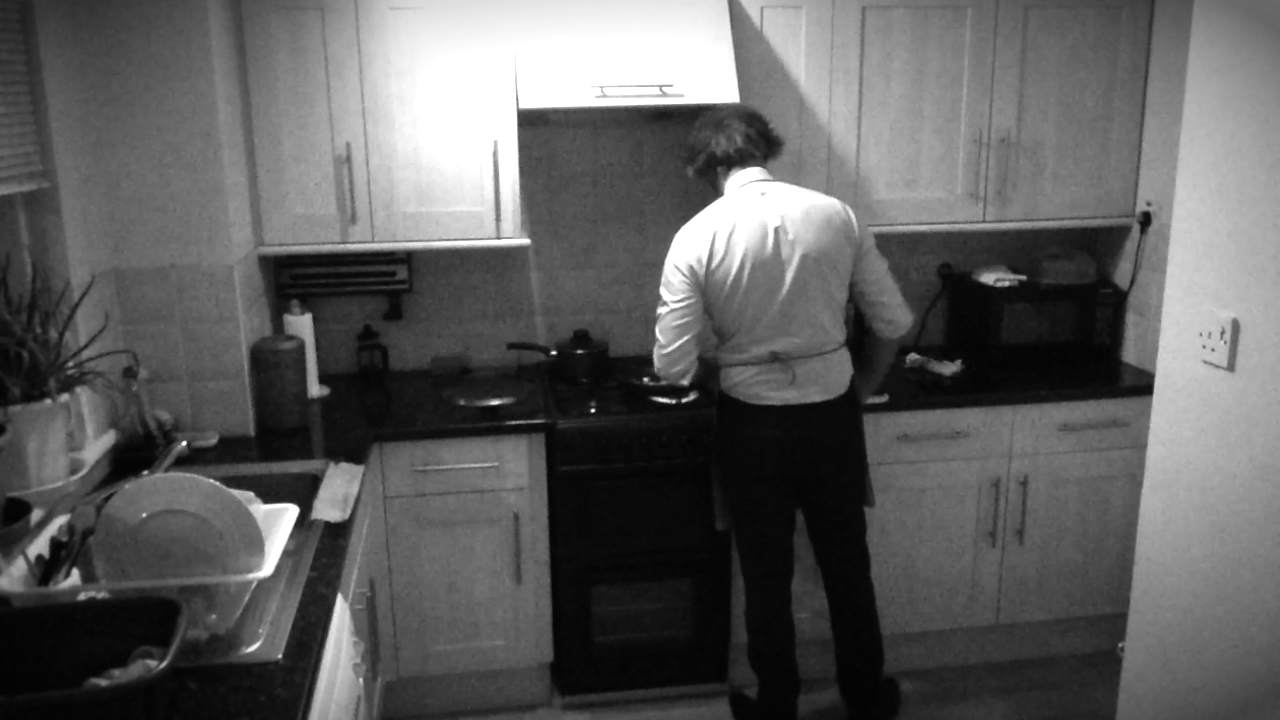 ‘Eat Me‘ is my entry for the Raindance short film contest #LockdownLover.  The rules: A 60 second film; must be COVID safe; includes a wide shot; feature lovers under lockdown.

Raindance, based in London, hold short film contests. There’s usually a brief and a related hashtag, such as #SixtySociallyDistancedSeconds or #SixtySustainableSeconds.

The first 60 second contest of 2021 was #LockdownLover, with a deadline of February 11th.

“So you’re stuck in lockdown over Valentine’s day. Dinner over zoom, amazon delivered flowers, maybe a deliveroo date. How about making a film about it? What is it like for lovers in lockdown?”

The contest clearly focused on couples. Singles, or those who had recently become single, appeared to be not included – or at least that was my interpretation.

I set about writing a story about a break up, but one that would not be obvious from the outset.

I visualised key scenes in the film, such as a man cooking supper in the kitchen, and his partner putting on makeup in anticipation for a romantic evening together.

I also wanted the action to play out to the sound of classical music.

In coming up with ideas, I wanted a standalone story about a couple reaching the end of a relationship, regardless of world events.

In hindsight, this does mean that the film may not meet the rule of being a film based on love in lockdown.

But, it’s based partly on fact – relationship breakdowns have been one of the many symptoms of life under strict restrictions, families and couples living in close quarters without regular breathing space from one another.

Being single and not living with anyone who could help film the other role, I got in touch with an actress friend based in Edinburgh, Lubna Kerr. She was more than happy to help after reading the script.

For filming, I drew a shot list and gave specific directions for Lubna’s scenes, which she filmed in her home with her mobile phone.

Dialogue or no dialogue?

My original vision didn’t include any dialogue as I wanted to tell the story completey through moving images and music.

I did draft a version of the script with some lines for each character, which we did record, but opted not to use in the end. It worked better without them.

The final cut was put together by my good friend Martin Smith who is an experienced Editor based in Glasgow. We’ve worked on projects in the past, such as his short film Billy, and The Ching Room, a play which he filmed for archival purposes.

I love twists and wanted to lead the audience in one direction, only to subvert their expectations.

What do you think? Love it or hate it? Watch the film and leave a comment below.